Forming in 2018 – Guitarist Pete Greenway, drummer Keiron Melling and bassist Dave Spurr, formerly known as the last and longest serving line up of The Fall, were invited by Damo Sazuki to join him as “Sound Carriers” for a one-off performance at the White hotel in Salford. Rekindling their necessity for music, they set about searching for a vocalist. After a chance encounter at a pub in Colne and a lengthy conversation about the future of Imperial Wax, they decided to team up with Sam Curran, guitarist and vocalist from Leeds based punk band Black Pudding.

May 2019 saw the release of their critically acclaimed debut album, Gastwerk Saboteurs, as where the singles ‘No Man’s Land’ and ‘Art Of Projection’. Later that year, amongst touring the UK, Ireland and Europe, John Robb’s Louder Than War released the double A side single ‘Bromidic Thrills’ and ‘Bloom & Wither’.

As touring and life ground to a halt in 2020, new ideas started to simmer. With the lifting of restrictions the band launched themselves into the writing of fresh material. Often too busy with a heavy, booming work schedule Dave turned over his bass duties to long time friend of the band and Black Pudding bassist Shane Standrill.

With Shane fully initiated into the band via a short run of UK dates at the back end of 2021, Imperial Wax are currently working on their second LP.

Upon his passing in January 2018, Mark E Smith had been performing with the most stable and consistent line-up of The Fall for more than a decade in the form of Dave Spurr (bass), Kieron Melling (drums) and Pete Greenway (guitar).

That line-up now continues under the name Imperial Wax, with singer-guitarist Sam Curran fronting the unit, and the band releases a brand new special red vinyl 7” single via Louder Than War Records. 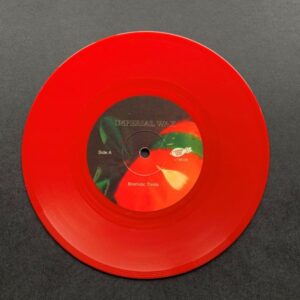 The Art Of Projection

We wrote and recorded the whole album in 10 days minus the vocals. We had some time off to write lyrics, then recorded all the vocals with our producer Matt, who then mixed the whole thing straight after the last vocal session. That’s how we used to operate with The Fall, so we like it that way and feel like you capture something raw with good energy.